The oldest remaining parts of St Michael’s church date from around 1200. It is the only remaining church within the old town walls. In the 16th century it was referred to as tanquam matrici ecclesie (mother church). After a period of decline when the fabric had become unsafe, the south aisle was rebuilt in 1748. From 1841 the Rectors embraced Anglo-Catholicism and this influence is seen in the remodelling and redecoration of the church which followed and included the addition of a chancel in 1878 and stained glass windows by Henry Holiday in the 1880s.

The modern period is represented by the sculpture of St Michael the Archangel on the tower which dates from 1976 and the east window from 1987.

Notable monuments include those of the knight John de Warenne, Sir Nicholas Pelham who repelled a French expeditionary force, geologist Gideon Mantell and militant pacifist Fr Kenneth Rawlings. The parish records include the marriage of the radical Thomas Paine. 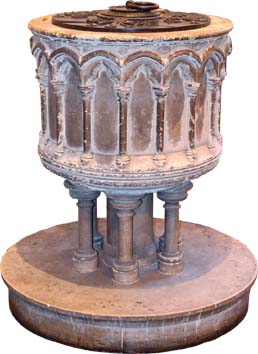